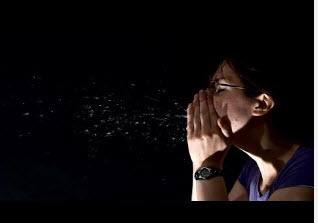 Since December, the headlines have been full of horror stories about the aggressive Aussie flu and it’s now reached epidemic proportions.

Not only have 1,938 people been hospitalized but, shockingly, 93 people have died -including 18-year-old Bethany Walker from Scotland, who made headlines last week when she passed away from pneumonia, caused by the illness.

WHAT YOU NEED TO KNOW

Aussie flu is similar to regular flu – except more severe. You can be diagnosed via a swab test at your local A&E, but look out for body aches, coughing, exhaustion, fever, headaches, congestion, a sore throat, vomiting and diarrhea. Usually flu clears up by itself with the help of rest, sleep and drinking lots of water.

However, seek help from your GP if problems persist for over a week, you’re worried about your child’s symptoms, you have a long-term medical condition or are pregnant.

Patients are advised not to call 999 or go to A&E unless they develop a sudden chest pain, have trouble breathing or start coughing blood. The vast majority of people who catch it recover in 7-10 days. Vulnerable people are also urged to get a flu jab. And you can prevent the virus spreading by washing hands regularly.

the following story of a family having the Aussie flue, Tiffany Sherlock, 44 – who lives in Salisbury with her partner, Brent Woodbridge, 49, a finance worker, and their daughter, Lyra, three – says her whole family has been infected by the virus.

Tiffany explains, “I first got ill at the start of November. My mother-in-law had visited while she had flu and, within a matter of days, I had a raging temperature, headaches and was exhausted. I ached so badly that I had to get on my hands and knees before I coughed so I could cope with the searing pain in my back and ribs.

“I couldn’t even pick up Lyra because I was in too much pain. Lying in bed, I couldn’t bear the thought of going back to my job at a charity, where I’d been working for six months, because I was too exhausted – so as crazy as it sounds I actually decided to quit.

“My boss thought I was delusional, but I’d been thinking about quitting for a while-Aussie flu just made me realise that i I needed to do it sooner rather than later.

“To make things worse, four days I  later, my little girl caught the bug and, a few weeks later, my partner, Brent, did too. Lyra was being sick all the time.

We were both really worried -she’d never been like that before.

“We didn’t realize how serious it was, so we didn’t go to A&E. But, eventually, I went to see a doctor, who confirmed I had flu.

After doing some research, I realized it was the Aussie strain,

“They told me that no air was reaching the bottom of my lungs and gave me two courses of antibiotics and an inhaler.

However, I was left with a lung infection and it was another two weeks before I started to feel better.

“We’d booked to go on holiday to Center Pares, but Lyra was still so poorly, we didn’t want her to mix with the other children and she spent most of the time feeling too unwell to enjoy anything.

“After seeing how many people have died from the illness, I just feel glad to be alive. It’s very sobering to think what could have happened if I hadn’t gone to the doctors when I did.

“Now my two elderly parents, aged 75 and 79, have also been infected. I’m extremely relieved they’re OK now because I know older people are at risk.

“My sympathy goes out to anyone who has Aussie flu and I’d advise them to get rest and medical advice as soon as possible. 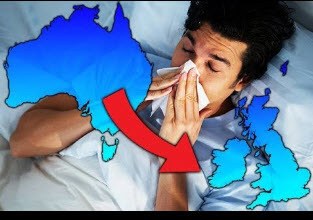 The Aussie Flu is believed to be gripping the UK amid fears it will be the worst outbreak in 50 years.

In the last seven days alone 1,111 people have been hit by flu – a shocking increase of 156%. And experts believe this suggests the killer strain, called H3N2, has arrived.

The Royal Liverpool is among Britain’s hospitals which has seen a sudden hike in flu admissions.

Down Under it has killed 300 people and affected 170,000 as carnage swept Australian hospitals in one of the country’s largest outbreaks.

The terrifying strain mainly affects older people, those with long-term health conditions, pregnant women and children. And worryingly its symptoms are identical to those of a normal flu – sore throat, headache, fever, muscle ache, runny nose, sneezing and fatigue.

Only with this mutated strain the symptoms are much more severe, and if it persists for longer than a week, it’s potentially Aussie Flu.

The fatal disease, which can be fought with rest, sleep, keeping warm, taking paracetamol or ibuprofen and drinking plenty of water, can lead to pneumonia and other potentially deadly health complications.

Nick Phin, of Public Health England, told The Sun there is no real confirmation Aussie Flu has arrived yet, but said the best way to avoid catching Aussie Flu is to get the flu jab. He said: Flu activity, as measured by a number of different systems, has continued to increase in the last week or two.

This is to be expected as the season progresses and at this point the numbers are in-keeping with previous years.

The circulating flu strains match those in the current flu vaccine, so the vaccine remains the best defense against the virus.

Experts have been warning the Aussie flu could be more dangerous than the 1968 flu pandemic that killed more than a million worldwide.

Public health expert Professor Robert Dingwall, of Nottingham Trent University, previously told BT.com: The reports from Australia suggest the UK might be in for the worst winter flu season for many years. 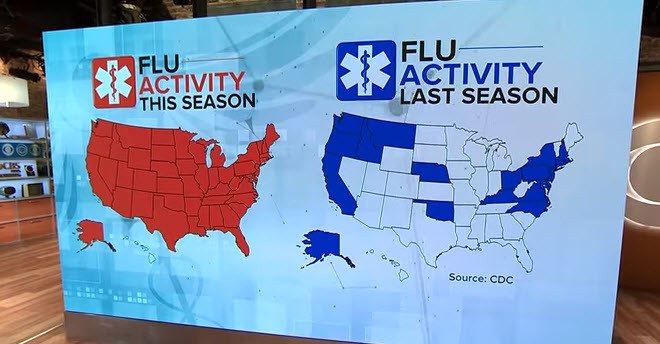 the flu virus infects millions of people across the world every single year at the moment in the UK were at the peak season for flu and it can be very contagious and very serious in vulnerable people like babies or the elderly but for most people it tends not to be serious at all.

It’s the World Health Organization who decide every year the three strains that will go into the vaccine it’s normally the virus that is doing the rounds that season that goes into the vaccine and there’s great debate at the moment about how effective the flu vaccine is or can be but it really depends on the year so last year the flu vaccine was very effective in the under 65’s but not so effective in the over 60 finds the NHS that would say you must still get a vaccine if you’re in the vulnerable group because it’s better to have a jab than not to.

Antibiotics will not help get rid of the virus they simply don’t work the best way of getting over the flu is to rest to drink lots of fluids and to take paracetamol and also the way to contain it and to stop contracting it is to put your hand over your mouth when you cough will you sneeze and to wash your hands regularly because the virus can live on surfaces many surfaces for many many hours. 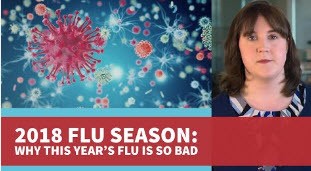 Welcome to Dr. David Eifrig’s Health & Wealth Bulletin. This is Weekly Update. Right now, we’re in the midst of one of the worst flu seasons on record.

In fact, about cases out of every 100,000 hospitalizations are because of the flu.

That’s one of the highest numbers that we’ve seen. Unfortunately, we still have about 11 to 13 weeks left, meaning that this flu season can get even worse.

Already, we have 30 children who have died of the flu in the U.S. and the number of adults is still untold. We won’t really know until the end of flu season.

Now the reason the flu is so dangerous is because of how quickly it mutates. So the flu virus comes in one of three types.

Type A is the most dangerous – that’s the one that’s responsible for so many epidemics like we’re seeing right now.

So that’s the kind we’re going to focus on today. Now the flu virus gets its name from two proteins on the outer shell of its envelope.

There’s the H protein and the N protein.

Now these two proteins are important because they both help determine how infectious the flu is and how quickly it can spread once it’s inside your body.

The combinations of these two are why we get different strains like H1N1 or H3N2, which is what we’re seeing right now.

Now H3N2 is one of the most dangerous types out there because of how quickly it spreads and how many complications it can bring.

Now this might also be why we’re seeing such low effective rates for the vaccine.

Here in the U.S. they’re estimating about a 30% effectiveness, but in places like Australia, it’s only about 10% effective.

Now, one thing to keep in mind is: don’t let this dissuade you from really getting your flu shot every year.

In fact, one study out of the Uniformed Services University of the Health Sciences demonstrated that getting your flu shot actually lessens the severity of your symptoms.

They looked at a group of folks who had the flu, about 72% of whom were vaccinated.

Those who’d been vaccinated had a far lower chance of having a fever, they had fewer upper respiratory problems, and overall their symptoms were far less severe.

This is very important because we want to make sure we get as much protection as we can, even if we do get the flu.

Another point to keep in mind here is that about 80 to 85% of all children every year who die from the flu were not vaccinated, so it’s especially critical to get your flu shot if you’re a child, if you’re an adult over 65, or if you’re someone with a compromised immune system because you certainly need that help fighting off the flu.

So if you’re having symptoms of the flu, it’s important to know if you have the flu or simply another cold.

Remember, the cold is also a virus, so it’s very similar in the way it presents. In fact, both colds and flu give you a cough, sore throat, runny nose, body aches, headaches, fatigue, sometimes even fever.

But it’s important to remember that colds usually come with a stuffy and a runny nose and they come over a period of time – you can feel yourself getting sick.

With the flu, the key is a very rapid onset of symptoms.

If this is the case for you, you certainly want to go to your doctor and talk to them, especially if you’re in one of these immune compromised groups.

If that’s the case, your doctor may recommend antiviral medications.

These are special medicines designed to fight the flu but they’re only really effective if given within the first 48 hours.

That’s why keeping an eye on your symptoms and getting help immediately is really important.